Elina Childs, 9, quickly delivers $120 worth of munchies to the masses. 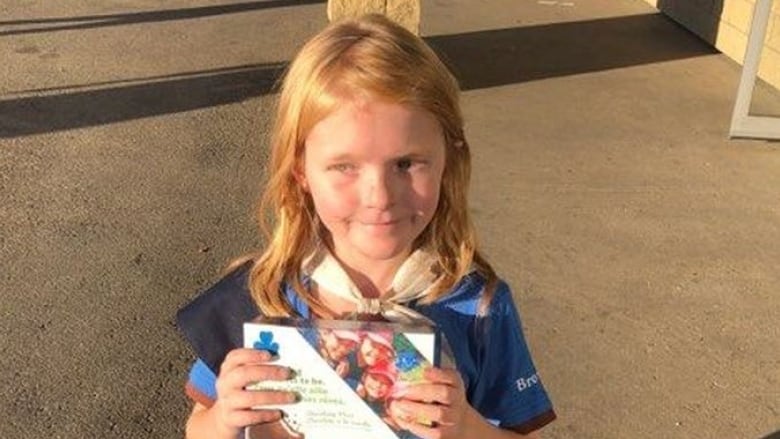 Elina Childs, 9, sold all her Girl Guides cookies in under 45 minutes to people lined up waiting to buy cannabis on Wednesday. (Supplied by Seann Childs)

As Edmontonians lined up to buy legal cannabis from retail stores on Wednesday, Elina Childs saw a business opportunity.

The nine-year-old Girl Guide and her father showed up at Nova Cannabis just south of Whyte Avenue, pulling a wagon filled with top-shelf munchies: sandwich cookies and mint thins.

“It amazed me how quickly they went,” said her dad, Seann Childs. “Even people in cars driving on the avenue there would stop and roll down their window and ask for cookies.”

Elina had to go back to school Thursday, so she couldn’t come to the phone to talk to CBC News. But Seann Childs said his daughter has previously sold cookies door to door in their neighbourhood. People aren’t always home, Childs said, so it’s not always successful. Last year, Elina was bitten by a dog.

Her dad came up with the idea of selling Girl Guides cookies to customers in line for legal cannabis after hearing that Scouts had used similar sales tactics when cannabis was legalized in California.

He asked Elina if she’d want to try, and said she was excited to give it a shot.

Elina has cystic fibrosis, so she usually can’t be around people who are smoking. But Childs said he saw it as an opportunity for her to benefit from smoking for one day — and demystify cannabis legalization.

“We were looking at it as an opportunity to educate her on what marijuana is and the fact that it’s legal in Canada now,” Childs said.

The pair walked up and down the lineup, which stretched around the block the entire day. Elina got to see that those looking to buy cannabis weren’t just one type of person, Childs said.

They met people of all ages; some with their dogs.

Childs said his daughter has always had an adventurous entrepreneurial spirit.

“Everybody we met was incredibly friendly, it was a great atmosphere and there was not a single thing going on in that line that I saw that I would just say, ‘Oh, my god, I need to shield your eyes from this,'” he said.

“Everybody was respectful, everybody was happy, and she walked away from it as this incredibly positive experience as well as selling out all her Brownie cookies. She can go and be happy that she’d done that and help support the Guides too.”