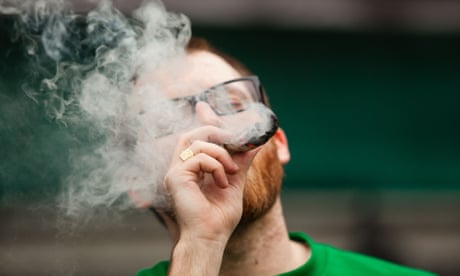 The future is clear. With recreational cannabis already legal in nine US states, polls show a majority of Americans now consider it “safer” than alcohol. Big business has listened. California’s famed Napa Valley and Sonoma County are sprouting marijuana estates. The state of Colorado has garnered almost$1bn in taxes from cannabis sales over five years, most of it going to schools. The biggest breakthrough is expected when production moves from weed for smoking to cannabis for eating and drinking. One company in Los Angeles is already marketing cannabis-infused sauvignon.

It is now 64 years since three men became the last people to be imprisoned in Britain for the earlier taboo of criminal homosexuality. They were victims of home secretary Sir David Maxwell Fyfe’s campaign to “rid England of this male vice … this plague”. Within 15 years homosexuality was legal, and Britain moved into the progressive lane. It prided itself on reforms to laws surrounding abortion, divorce, theatre censorship and racial abuse. Tragically, that is not true today. I wonder who will be the last Briton imprisoned for a cannabis offence – some 30,000 people have spent time in police custody in the past five years.

The charity Transform estimates that half of all acquisitive crime is due to the illegality of the drugs industry. The police claim an astonishing 95% of marijuana consumed in Britain is high-strength skunk, heavily promoted by dealers. Drug-related deaths are rising, not falling.

Like a Home Office metronome, the home secretary Sajid Javid earlier this month announced yet another futile “clampdown”, this time on middle-class drug users. He would “target” their suppliers by “holding a review”. The same day as this desperate bid for a headline, bankers gathered in a Mayfair hotel to hear about investment opportunities in the new global industry, possibly worth $200bn a year, from which Javid wants Britain locked out. Cannabis products would soon transform agriculture, pharmaceuticals, mental health and the drinks trade. They could possibly outsell beer.

Canada is hardly a nation of rabid potheads and hippies. It is a calm, secure and tolerant society. Justin Trudeau understands, as Britain does not, that easing up on possession is not the point. Anyone who wants drugs can get them. The question is how, and from whom. The damage to society lies in criminalising supply, tipping huge sums into the pockets of violent crooks. I recall some years ago being menaced by two dealers outside an event on drugs legalisation, who said, “You lot just want to do us out of business.” Prohibition has been their friend.

While Americans are spinning their weed wheels and going to sommelier classes, British buyers are left to the mercy of pub lavatories and grubby street corners. While Canadian consumers can sit in saloons and cafes, safe in the knowledge that what they enjoy is inspected and tested, Britons must run the gauntlet of violent gangs, proliferating from cities to rural “county lines”. Their activities contribute nothing to the state, and cost it a fortune. Ten years after medicinal cannabis was everywhere abroad, it took a personal tragedy and a tabloid campaign to permit the Home Office to allow it in Britain. It was a cynical display of what it takes to get Whitehall to change its mind.

The UN reckons there are now some 700 psycho-active substances circulating the world’s streets, with new “legal highs” every month. The idea that they can all be banned is absurd. Drug laws have become the most arrogant, pointless and socially harmful foible of centralised power in modern times. They have wrecked political economies across South America. They have destroyed the lives of millions of otherwise innocent citizens.

Drugs, harmful and harmless, need legalising, controlling and, where appropriate, curbing. Courts and prisons have no place in this. They, too, are the dealers’ friend.

As we have seen in the US and Canada, reform comes first from the frontline, where the absurdity of suppression is most harshly felt. Those most distant from locality are the most reactionary – since change for them is a matter of wounded pride. In Britain, police, doctors, social workers and psychiatrists have all lined up behind legalisation in one form or another. But national politicians are like generals facing defeat. They refuse to admit they might have been wrong.

Donald Trump about-turned in June and said he would “probably end up supporting” other American states in legalising cannabis. He might end the federal ban on interstate trade. This will undoubtedly unleash a wave of liberalisation, not just across the Americas but also across the European Union. A true social revolution is at hand. When it comes, I bet the Home Office will take to the hills and bury its head in the sand. It still believes the world is flat.

… we have a small favour to ask. More people are reading the Guardian than ever but advertising revenues across the media are falling fast. And unlike many news organisations, we haven’t put up a paywall – we want to keep our journalism as open as we can. So you can see why we need to ask for your help.

The Guardian is editorially independent, meaning we set our own agenda. Our journalism is free from commercial bias and not influenced by billionaire owners, politicians or shareholders. No one edits our editor. No one steers our opinion. This is important because it enables us to give a voice to the voiceless, challenge the powerful and hold them to account. It’s what makes us different to so many others in the media, at a time when factual, honest reporting is critical.